The polo may just be the perfect shirt. They're as comfortable as your favorite tee, yet the collar frames the face nicely, adding a sort of cool formality to an otherwise casual item. A true citizen of the world, the polo shirt pairs well with a linen sport coat and trousers for a proper summer outing, yet it looks just as at home with all-American denim for carnivals and candy apples. It's the uniform of—of course—international polo players as well as Silicon Valley techies. But just where does this ubiquitous wardrobe workhorse hail from? And, more importantly, how do we wear it today?

The Origins of the Polo

According to the lore, the classic Oxford cloth button-down was the original uniform for polo, the high society "sport of kings" war-game on horseback. Sometime in the 1920s, though, as athletes discovered the ease of knit fabrics; the silhouette we know today came to be. It rocketed to prominence when a certain suave French tennis player named René Lacoste donned it for his matches. Nicknamed "le Crocodile" for his ferocious dominance of the court, Lacoste's take on the piece launched millions of embroidered alligators, and a style icon was born.

By the 1950s, the United States post-war elite made the shirt de rigeur for its country club lifestyle, finding its ease as accommodating for the tennis court and golf course as it was for aprés-sport cocktails. The anti-establishment '60s may have set the style back a pace; but in 1980, Lisa Birnbach's "Official Preppy Handbook" brought Ivy League tastes roaring back. When corporate dress codes crumbled in the 1990s with the onslaught of Casual Fridays, our short-sleeved hero became the casual office's unofficial uniform. Surviving—even dominating—the last decade's streetwear and athleisure trends, polo shirts today have taken on a universal appeal, spanning sporty performance models as well as luxury and designer collection offerings.

How to wear them: Pair a subtle pattern with an unstructured blazer and dark stretch denim for that corporate video call.

Logos and polo shirts go together like ice and tea. You can pick your emblem from the aforementioned alligator to giant bunnies to whales to type treatments... or have no logo at all. Some shirts feature logos or brand names as allover repeats, while others are placed haphazardly on the body of the shirt. Although solids are a favorite, subtle, "non-solid solid" neat patterns are great this season. Horizontal stripes look particularly good when they're banded right across the chest. Slimming vertical stripes are also an athletic look for polos, while contrast collars and cuffs offer a bit of distinction.

How to wear them: Throw on a breezy oversized style with athletic shorts and sneakers for weekend walks.

The classic "to pocket or not to pocket" question: Some men wouldn't be caught dead with one messing up their clean minimal look, while others think it's a great design statement (they're also great for stashing golfing score cards and a short pencil).

How to wear them: For the course, of course, with classic golf pants and a ballcap.

This neckline eliminates buttons, opening up more like a V-neck and allowing the collar to spread a bit wider. Long sleeved versions can feel almost as formal as a dress or sport shirt, while others might be a bit beefier, wearing more like a sweater (a favorite if you're in an overly air-conditioned space all day, or for cool evenings outdoors). Both 1950s retro looks and clean-cut modern styles might swap those buttons for a smooth zipper.

How to wear them: Layer one over a striped tee, white shorts, and loafers for a preppy, all-American vibe.

Finally, a Note on Fabric

The classic cotton pique not only looks great, it has cooling performance characteristics, too. Slub knits offer a more casual take on the classic, while super soft and smooth Pima or mercerized cottons have a kind of glossy elegance. Don't resist synthetic blends, either—today's moisture-wicking and cooling fiber technologies look and feel better than ever.

More Men's Style Inspiration for You 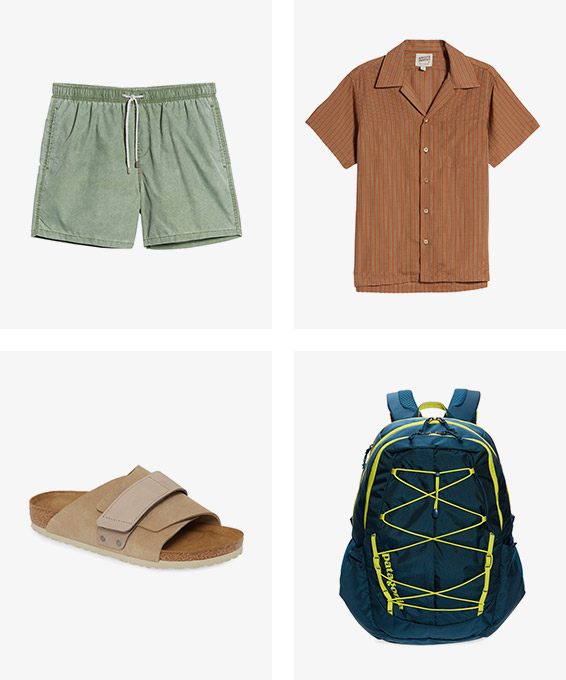 Outfits That Do Double Duty

Go anywhere this summer with a few go-to outfits.

Get ready for your getaway with versatile, comfortable outfits.

The staples you'll want to wear all season long.

Check out spring trends in some of our favorite places.

Liven up your wardrobe for the new season. See all the latest styles and trends for spring along with outfit inspiration and advice from our expert stylists.

To build a great wardrobe, go back to the basics. Browse through our favorite essentials and classic pieces along with style advice and outfit inspiration.

Have questions? We're here to chat. Enter your name to get started.