You know the best thing about fashion? There are really no rules, other than this: you can wear whatever you like, as long as it fits. The increasing popularity of gender-neutral clothes illustrates the point perfectly.

Neutrality in fashion isn’t a new idea—the line that separates “men’s” and “women’s” style has faded many times as trends come and go. But now that line is blurrier than ever. And as nonconforming politics and presentation become more mainstream and demand grows, brands of all sizes are introducing more gender-neutral clothes in their collections. This allows people to explore fashion more freely, trying silhouettes that haven’t always been available in the traditional men’s and women’s departments.

The fashion industry has long favored this freedom. “Unisex” as a trend, term and attempt at inclusion first came into vogue in the ’60s, as a reaction to the strict gender roles that defined mainstream style in the 1950s. Yves Saint Laurent introduced his iconic tuxedo adapted to the female form and Pierre Cardin launched the collarless jacket that shook up men’s suiting standards, inspiring countless designers to keep pushing the boundaries all the way up to today. Pop culture has also played with unisex and androgynous style over the years, from David Bowie’s glam garb to Kurt Cobain’s prom dresses to Tilda Swinton rocking every look under the sun.

While some designers in this space embrace the stereotypical extremes (even if it’s only to subvert them), today’s gender-fluid styles tend to be more about finding that middle ground between masculine and feminine. Rather than designing for a specific gender norm, brands are leaning on sizing and styling to accommodate different body types and gender identities. This removes some of the fit obstacles faced in the past and takes us back to the first (and only) rule of fashion—just wear what you like.

When you factor in personal style, there are endless options for freeing up your closet. We’re here to get you started, with eight essentials that’ll build a foundation for your gender-neutral wardrobe.

It doesn’t get more versatile than this crisp classic. A breezy button-down like this is casual perfection with everyday denim, or you can dress it up with a tailored vest and tie á la Annie Hall.

A slouchy, oversized hoodie isn’t only the coziest thing in your closet, it’s also the cornerstone of casual style. Layer it on instead of a sweater—it’s surprisingly versatile when paired with structured pieces.

If you aren’t into skinny jeans, a straight-leg style may be your best bet. Grey denim feels a touch more modern than basic blue, and light fading adds a well-loved look.

These pants give you room to move, and the fluid, easy silhouette balances whatever you’re wearing on top. Choose a style with a drawstring waist for a just-right fit.

Chucks have been around forever, yet somehow they’re perpetually fresh. Wear them with suits, dresses, denim, whatever—they’re an easy way to add a little attitude.

A classic cashmere scarf makes everything look—and feel—a little more luxe. A neutral hue is always nice, but you can get creative with the color, pattern and looping technique. For inspiration, check out our video on four different ways to wear your scarves.

Low-frills, high-function totes are the peak of practicality and neutrality. Opt for clean lines and durable materials (this one’s made from weather-ready recycled nylon) to add utilitarian edge to your look.

More Style Inspiration for You

Explore all the benefits (and more!) of your personal styling team. 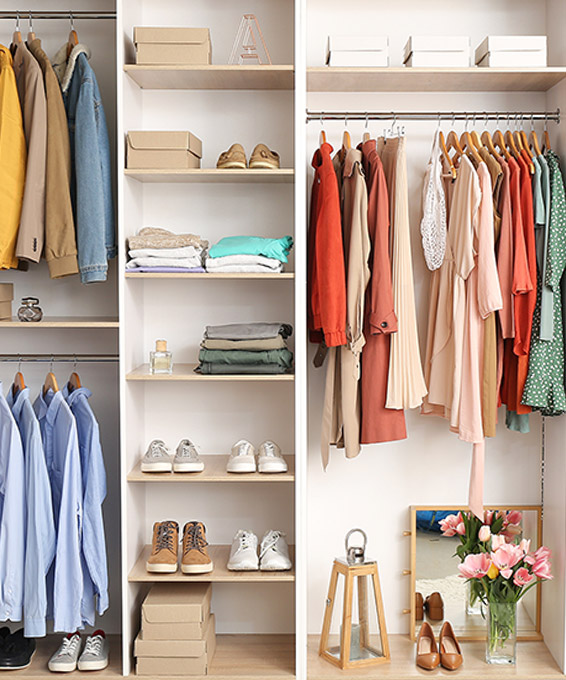 Quick Tips to Declutter Your Closet

Three easy ways to organize your closet this season.

Just because you can't be there doesn't mean you can't send the best gift.

The History of Mother's Day and...

There are many ways to spoil the amazing mothers in our lives.

Have questions? We're here to chat. Enter your name to get started.